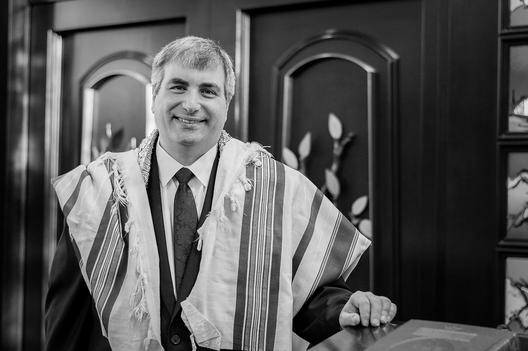 Cantor Menachem Bazian has been a cantor for over 30 years. He was associated with the Monsey Jewish Center for 15 years after which he served in Duluth, MN, Queens, NY and his native Passaic, NJ. He returned to the Shaarey Israel family in 2013.

Cantor Bazian thinks of his cantorial style as “traditional.” He enjoys singing with his congregation and trying to add meaning to the prayers through his cantorial art.

He comes from a cantorial family. His father, the late Cantor Moshe Bazian was a world-class cantor. Anyone interested in experiencing a true cantorial master can see many examples on YouTube.

His brother, Cantor Benjamin Bazian, serves as a cantor in Silver Spring, MD.

Cantor Bazian is joined by his wife Chana. The Bazians have three children. Their twin sons, Baruch and Shmuel, are married with six children between them. Their youngest son, Yitzchak, is a doctoral candidate in Minneapolis, MN.

Cantor Bazian writes a monthly article in The Scroll and invites your comments. You can email him at njChazzan@gmail.com and follow him on twitter @njChazzan. His website can be found at www.CantorBazian.com.